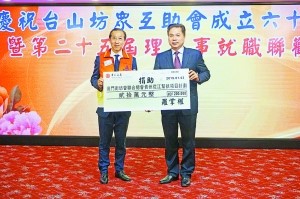 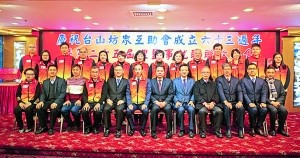 New Board of Directors of the Mutual Assistance Association of Artur Tamagnini Barbosa Neighborhood Residents encourage better communication between government and people.

On Friday, January 3, 2019, Chairman Lucas Lo and Deputy Chairman Maximiliano Lo attended the celebrations of the 63rd Anniversary of establishment of the Mutual Assistance Association of Artur Tamagnini Barbosa Neighborhood Residents and the Inaugural Ceremony of the 25th President and the Board of Directors. As the President of the association, Mr. Lucas Lo said that he will continually lead the association to provide better service to the residents, actively express the residents’ concern and opinion to the government, build up a bridge for better communication between the government and residents, support and supervise the government, lead the association to strive for better achievements and build up a harmonious community.

This year is the 70th anniversary of founding of People's Republic of China and 20th anniversary of Macau reunification to China. President Lucas Lo declared on his speech that he aspires the association can make bigger achievements to fulfil people’s needs and expectations by embracing fresh thinking. Keeping up with the pace of change, he hopes the new Board of Directors can lead the association with new style of management and make efforts to build up a harmonious community. At the end of speech, President Lucas Lo and Vice President Maximiliano Lo donated MOP 300,000 to the General Union of Macau Residents Association in helping people in Guizhou Congjiang County.